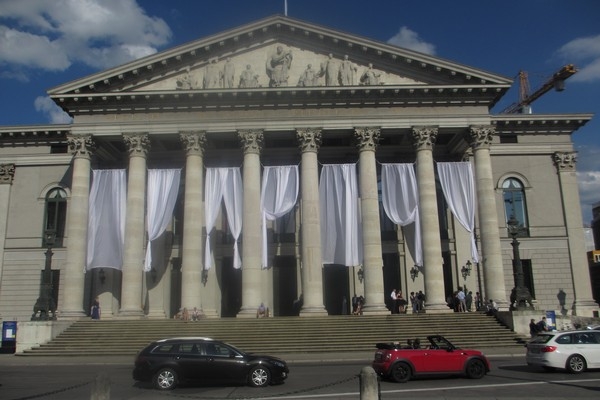 Entering the elegant opera house for La Traviata during the Munich Festival was a highlight of our trip. It’s many years since I reviewed opera professionally, but humour me as I give you a glimpse of this production (July 15, 18). Rolando Villazón and Sonya Yoncheva would no doubt have transformed it, had they not both cancelled. Instead it was left in the brave, frenetic hands of Ermonela Jaho, who almost managed to rescue it—on her birthday, as it turned out. In total control of her sumptuous voice, Jaho as Violetta was haunted from the first moments—I have never heard any soprano sing the key word ‘Gioir!’ with such anguish.

This is a woman’s story and Jaho told it on a tide of nervous energy. The production, however, had flaws. The conductor and orchestra played as though they were bored with Verdi, and to be bored with Verdi is to be bored with life. Pavol Breslik as Alfredo was no match for Jaho’s dramatic intensity. Like the excellent Simon Keenlyside (Giorgio Germont, Alfredo’s father), Breslik also struggled with absurdities of direction, which provided constant upstaging along with rearrangements of clothing.

During all the big arias, except for Violetta’s solos, there were tricks with champagne glasses and cards, principals wandering about the stage with hats, coats and sticks—even a gigantic swing in Act II, which only Jaho was allowed to ignore. It was agony watching Breslik fiddle with his cuffs in the worst moment of his life, when Violetta leaves him. Agony of the wrong kind. The upstaging even involved a superfluous Germont in this act—Alfredo’s sister.

Impetuous passion, impossible yearning, pity and loss—Verdi poured immense emotion into La Traviata. The key to it all is utter dedication to his music. Except in the hands of Ermonela Jaho, that key was lost during last night’s performance.