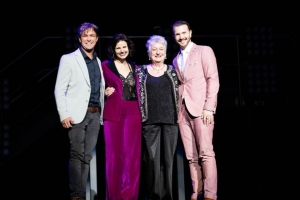 My translations of selected excerpts from Voltaire’s and Émilie du Châtelet’s letters began with the year in which they met (1733) and are just about to reach 1738, the year in which our opera Émilie & Voltaire is set—the award-winning composer is Nicholas Gentile, recently winner of the Mary Lopez Scholarship (above right). This letter from Voltaire to Frederick, Crown Prince of Prussia, was written on 20 December 1737. I’m giving you V’s impromptu verse in French so you can see how amusing and challenging it is, especially to one who feels compelled to attempt it in iambic pentameter …

You have commanded me, monseigneur, to present you with some rules by which to distinguish French words that belong to prose from those consecrated to poetry. We might wish that such rules should exist, but we scarcely have them for our own language. It is my impression that languages evolve like laws: little by little, new needs that come to our notice give birth to laws which appear to contradict one another. It seems that man has a bent for behaving and speaking at random. Nonetheless, to bring some order to the subject, I shall define poetic ideas, devices and words.

A poetic idea, as Your Royal Highness knows, is a colourful image substituted for a naturalistic idea of the thing about which one is speaking. For example, I would say in prose: ‘There exists in our world a young, virtuous and talented prince, who hates envy and fanaticism.’ I would say in poetry:

Oh Minerva! Oh divine Astraea!
How you inspired his young idealism,
And of the arts and virtues made his crown.
False-hearted envy, the betrayer
Of truth, and pitiless fanaticism—
Both these beneath his feet are trodden down.