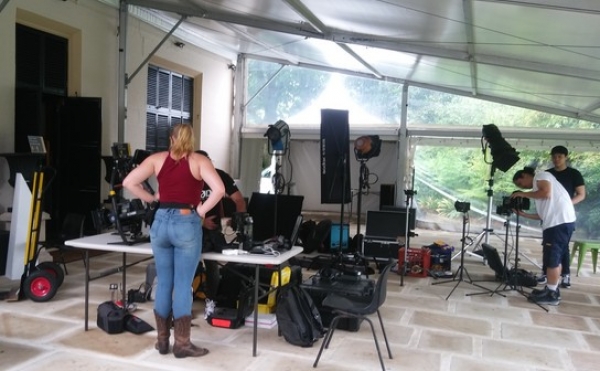 These people and this film equipment are at Lindesay House on Day One for the sole reason that the composer and I wanted our music and words on film. I have total confidence in his music—but when it comes to the words, I realise they are under absolutely pitiless scrutiny. And the scrutiny is mine, because composer and everyone else have their own tough job to do.

As I hear the same phrases from the speaker, time after time after time after time for each shot, I feel the very bones of the work are relentlessly laid bare. Every word—every syllable—counts. If there were a phrase that expressed nothing about the character pronouncing it, or sought no response from another in exchange, or were unreasonably difficult to sing, there would be a fracture in the body of this work that would take prodigies of effort by other people to repair. Words matter. The very concept of this concept film was first given in words!

When shooting is over on Day Three, my fathomless sense of responsibility for those words is matched only by my awe of the artists and technicians who have made them live and breathe. I must simply thank Thalia, the muse of drama, for making me work so hard on the libretto of Émilie & Voltaire.