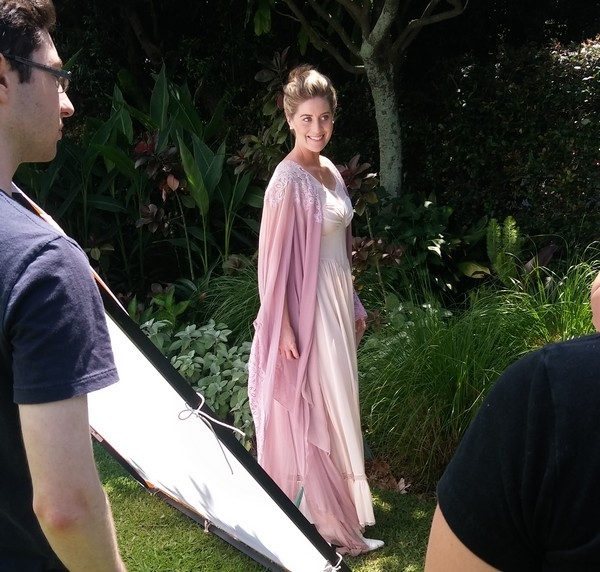 Brendan de la Hay, designer for the concept film, looked after (and in some cases supplied) the costumes and ‘dressed’ the sets. Here are some thoughts about costume from different moments in my diary.

First, the dress in the opening scenes: 'Julie’s dress, being a pearly colour with open floral pattern (‘parsemée de fleurs!’) in pinks and light greens (+ pink trim at bosom) is not unlike the dress in the supposed portrait of É that we used in the brochure. Funny how things cluster together.'

Later: 'Brendan and Nick showed me a lovely night-dress combination & wondered if Émilie could be wandering around in it, with Voltaire—I said sure. Reminded them of that servant of V’s who published a risqué memoir in which he claimed he’d seen É stark naked ‘comme une statue de marbre’. Probably a lie but people believed it at the time … Why not give ourselves that freedom? It gives lovely variety to the film …

Later again: 'Julie is standing near the end of the sofa in a lovely pink nightie waiting to shoot outside and upset with Nick that they’ll be shooting in the heat of the day. The cranked-up music is deafening! Last shot for Rob. Doing it once more. After a certain amount of discussion about time.'

'Lovely' was obviously my word of the day! You can see that Julie was all smiles for the very sunny shoot in the garden.