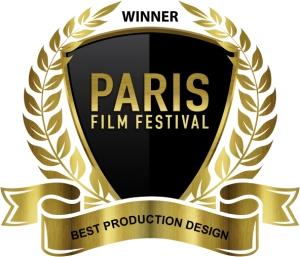 Wondering how Émilie & Voltaire is progressing towards our dream: a French-Australian co-production of the feature film? Nicholas Gentile explains on Sky News in May! 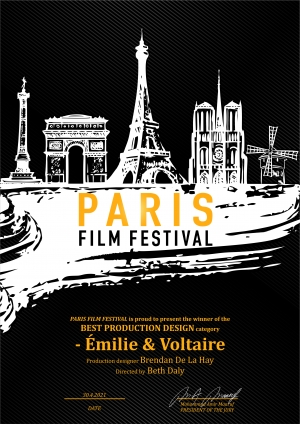 Yes, winner of the category Best Production Design. Due to pandemic restrictions the Paris Film Festival cannot do live screenings in the Le Bardy theatre or network events in cafes in central Paris but they will create 'Festival TV' on their website to show the winning films. In an earlier blog on the making of the Proof of Concept film in November 2020 I celebrated Brendan de la Hay's work on the set--congratulations, Brendan, for this recognition. And huge kudos to the whole team (see my earlier blogs).

This is an important step along the way to the full feature film of Émilie & Voltaire. It's been an exciting journey so far. Back in March 2018 when I sent composer Nicholas Gentile the first act of the opera, he asked for the libretto to be in French as well as English, and to exist not just as a staged opera but as a film, which would eventually be distributed through streaming services to offer accessible opera to millions for a fraction of the price of a regular opera ticket.

We realised not long ago that to our knowledge Émilie & Voltaire is the first opera ever to have been written specifically for the screen. The proof of concept film that just won the Paris Film Festival award is screening at the Puccini Opera Festival in Lucca on 15 May, with Italian subtitles, of course, provided by poet Paolo Totaro.

With the full screenplay well under development, we are aiming for an Australian/French co-production with exterior shooting on location at Cirey, the château in the Champagne region which Émilie and Voltaire made into one of the birthplaces of the Enlightenment, and from which Émilie made her mark as a physicist.