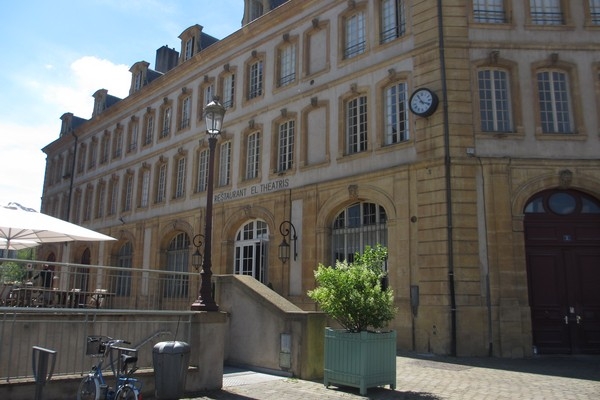 Metz. Lunching in El Theatris restaurant, next to the magnificent theatre, looking towards the cathedral on the opposite bank of the Moselle. I ask the waitress about the military barracks in Metz where the young Lafayette did his army training, long before he became a hero of the American Revolution, and then the great defender of France in Europe. She tells me his bureau was IN THE NEXT ROOM from the one where we're eating. Lafayette is one of the heroes of my novel Rebel here. She shows me the room and I confirm later--the building was indeed the officers' quarters when Lafayette was France's general, fighting to preserve the country against the European monarchies. Wonderful coincidence. I'm tempted to use the word awesome. Will settle for merveilleux. His bureau window is behind the white flowers.