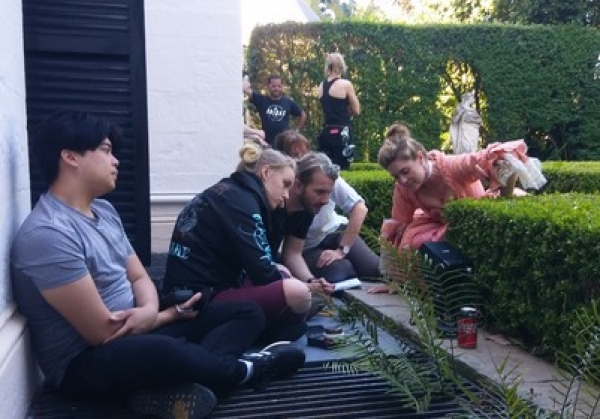 As the librettist on set I was a mere observer, fascinated to see how a film is shot. Here in the parterre garden at handsome Lindesay House in Darling Point, Sydney, I caught this moment after the camera had been following Émilie around the pebbled pathways as she sang her final aria. Here, as the sequence is played back on the tiny monitor, we see best boy Nathan Niguidila, focus puller Cayla Blanch, composer/executive producer Nicholas Gentile, director Beth Daly (partly obscured), and Émilie herself, Julie Lea Goodwin. In the background on the left is director of picture Aravind Shanavaz and assistant gaffer Steffanie Watson.

Starring with Julie Lea Goodwin in this short film are Rob McDougall as Voltaire and John Longmuir as Maupertuis.

In the following blogs I'll share with you some of my notes from those three intense and momentous days.