Letters from Émilie and Voltaire 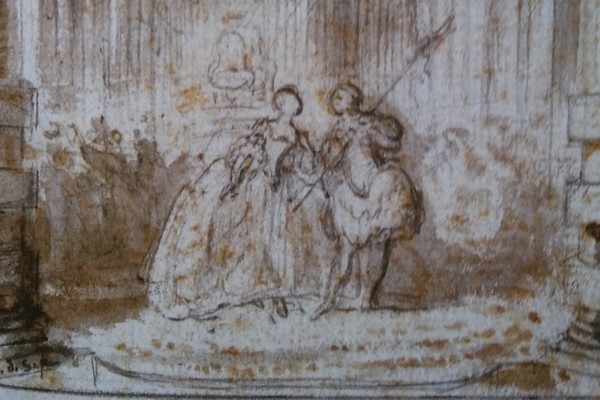 Happy New Year! In 2019 Nicholas Gentile is composing Émilie & Voltaire with the assistance of the Fine Music 102.5 Kruger Scholarship. To introduce you to this exciting project, every week this year we’re posting an extract from a letter from one of these famous lovers: on music, the theatre, philosophy, Paris, Cirey, physics, mathematics, friends … and love.

An opera about Voltaire and Mme du Châtelet—what could be more natural? Voltaire, twelve years older than Émilie, claimed to remember her as a girl, but their first fateful encounter was at the opera in Paris in 1733: Moncrif’s The Empire of Love. So began a love affair that lasted until her death in 1749. Voltaire was a poet, playwright and librettist; Émilie played the harpsichord beautifully and sang whole operas by heart, her favourite composer being Destouches. Today's image is from Destouches' opera, Issé.

From Émilie to Aldonce de Sade, December 1733
Despite princesses and pompons, I give serious consideration to the fortunes of my friends … I abandon myself to society without caring for it very much. One inconsequential thing leads to another and I can often spend whole days without really feeling as though I’ve lived at all … I’m delighted that [Voltaire’s] Adélaïde pleased you: I was touched by it. I found it tender, noble, moving and well written; the fifth act is especially charming … Voltaire himself has been ill for three weeks and hasn’t been out. But his imagination is none the less lively and brilliant for that: he’s managed to complete two operas and hand one of them over to Rameau, to be performed in six months’ time. People are bound to have written to tell you what Rameau is like, and the different opinions that divide audiences as to his music: some think him divine and far superior to Lully; others think his work finely wrought, but not in the least pleasing or varied. I must admit I belong to the latter group: I like Issé [by Destouches] a hundred times better—it’s on at the moment and Mademoiselle Le Maure excels in the title role.