A night in Okarito: in memoriam Keri Hulme 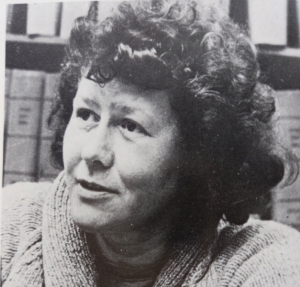 A night in Okarito, March 1988. There are few chairs in the big, circular living room that Keri Hulme built herself, so I am sitting on cushions with Bert Hingley and Robin Morrison, our backs against the book-lined wall. Keri is convivial and funny, whilst lamenting the caution of the helicopter pilot she hired to fly us over the Franz Josef glacier during the day. Fog and vicious winds have annulled this expensive treat but we are only too happy to enjoy her generosity in the warm space that I first glimpsed in The Bone People.

We are drinking South Island wine that we brought with us: Robin has just completed a commission for Hodder & Stoughton, photographing new vineyards for Michael Cooper’s latest Wines and Vineyards of New Zealand, and has kindly driven us down the west coast to this hamlet. Among them, Okarito’s eleven inhabitants manage to run a single motel, and a post office that provided a vital fax line between Keri and myself during the editing of The Bone People, four years ago. Keri is allergic to still wine, so thank the gods we have it, otherwise we’d be taking unfair advantage of her magnificent cellar of French champagne and Scotch whiskey. Robin, always versatile with the good things of life, has his own Tullamore Dew to hand.

Fluent and expansive in her writing, Keri is vivid and direct in speech: she relishes watching me cringe over her description of tomorrow’s breakfast—whitebait thrown live into the pan. Her range of reading is equally voracious. There is a scene in her novel where the boy Simon arranges shells on a beach—it has always made me wonder whether Keri has read Dorothy Dunnett, whose gloriously overwritten historical novels I loved as a teenager. Now I can ask. She sparkles at the reference and confesses to having all Dunnett’s Lymond chronicles.

As the others continue talking in this unique place, I’m seeing Simon on the beach and I’m even more aware of the richness of Keri’s work. One of the great novels of the twentieth century, The Bone People now speaks to millions of people, but the impulses behind it are impossible to categorise. Besides, in the literary world it’s fashionable to analyse the form and style of prize-winning novels: it’s not fashionable to believe they have a purpose. However, in this instant I know for sure that Keri is more about substance than style. I interrupt the others to ask, ‘You wrote your book so people won’t hit their kids, didn’t you?’ She says, ‘Yes.’

The Bone People was a force in itself before I read it, and many publishing stories can be told about it. Not least David Elworthy’s: as publisher at Collins, he loved the manuscript, and asked Keri if she would consider talking about it, then never heard from her again. David is a wonderful friend and was philosophical about Hodders’ eventually publishing it. Others who had reason to regret The Bone People moving out of their hands were Bob Ross and Helen Benton, who as Tandem sold the Spiral edition all over the country. Their immense energy and commitment drove it into bookshops and early success.

Keri’s novel was riding on a groundswell of recognition when Bert bought it in Palmerston North as a present to me. He read it in one sitting and decided Hodder & Stoughton should bring out an edition if at all possible. He went to Wellington to meet with the Spiral team and was impressed by them all, particularly Erihapeti Ramsden. He had great respect for what Spiral had done, as they were not essentially publishers and only brought the book out because they believed in it totally. On Keri’s approval they agreed to a Hodders edition, with their logo included on the spine. When it won the Booker Prize in London in 1985, they were there with waiata to receive it on her behalf.

Keri did not like to travel and was shy in public but she did attend a celebration at Hodders’ premises in Auckland. Bert asked Michael King to speak and Keri was moved by Michael’s gift of a Ngai Tahu pounamu adze that had been in his keeping some years and that he believed should go ‘home’ to her. It was an inspired gesture of respect.

I first worked freelance for Hodders in London, where Bert was with Heinemann Educational Books. I felt honoured a decade later to edit their edition of The Bone People. It is a powerful, structurally undisciplined novel of astonishing originality—in my view, asking Keri to alter it substantially would be as ridiculous as suggesting a revision of Thomas Wolfe’s Look Homeward, Angel. I edited for clarity, ensuring that each passage said what Keri had meant to say. This meant a hilarious to-and-fro by fax from Auckland to Okarito as I checked whether certain puns were her neologisms or slips by the first typesetter.

Also rather hilariously, I got silent flak from CK Stead when some time later I applied for the publisher’s position at Auckland University Press. His question from the admission panel was about The Bone People. He asked me, if for the sake of argument the book had been accepted by AUP as a new manuscript, would I have subjected it to a more interventionist edit? I said no, and I could see from his eyes that I’d given the wrong answer as an applicant. But it was the right answer about a work of genius! We had a friendly dinner with Karl a couple of years later in Sydney and he confirmed that AUP was doing beautifully without me …

Back in Okarito, the night at Keri’s goes on into the small hours as we move to her next-door neighbours’ for music and a high-kicking dance taught to us by Keri, causing an ache in the calf muscles that persists next morning when I walk along the grey, windy beach. It is one of our last nights in New Zealand before our family migrates to Australia. The whole occasion happens at Keri’s insistence—hearing that Bert was transferring as publishing director to Hodder & Stoughton, Sydney, she was adamant that he could not leave the country before visiting her in Okarito. He accepted without question.

I’ll always be grateful for that revelatory, raw, exciting and magical experience. I honour Keri’s honesty, her courageous spirit, her clear-eyed record of what humans are capable of doing to one another, and her love of country and its people.

I am whakama about this, Keri, as I offer you my true farewell.