Voltaire strives not to be wistful about the Académie Française 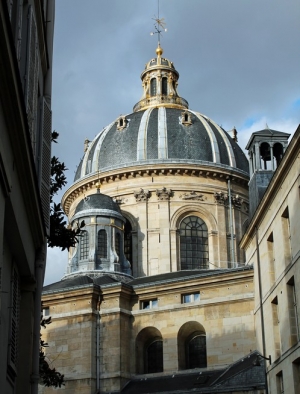 From Voltaire to Monsieur de la Chaussée, 2 May 1736

A week ago, monsieur, I searched out your residence in order to present Alzire [his latest play] to the man in France who best knows and cultivates the art of poetry, which so difficult to practise. I think just as you do, monsieur, about the art that all the world believes they know, and that so few know at all …

Of our exacting art, the only aim
Is to be even more precise than prose;
Thus for verse of genius we claim
That from the language of the gods it rose.

It must be said that you’re more worthy than anyone to justify this claim.

Today it was suggested to me that I might be elected to the Académie Française, but neither the circumstances in which I find myself, nor my health—nor my liberty, which I cherish above all—permit me to dare think of it. I replied that the place should be destined for you, and if your merits did not already secure you complete support I would be honoured to cede to you the few votes upon which I would have been able to rely [La Chaussée was subsequently elected to the French Academy].

The image is of the Institut de France, where the Académie Française meets. Voltaire was of course never elected to the Academy--too much of a firebrand.

From Émilie to Count Algarotti in London, 10 April 1736

I’ve sent you, monsieur, an in-folio manuscript of mine, much less to be valued than the four printed pages enclosed here [Voltaire’s dedication to Émilie of his play, Alzire]. I would never dream of letting you read the excessive praise lavished on me in those pages, if they didn’t also do such sound justice to you. The play itself is not yet in print, and anyway it would have made the package too large. I implore you to make sure that the Queen of England sees it—she reads French perfectly—and also to make sure that, if Alzire is translated and printed in England, the Dedication is likewise …

I beg you to send me your news, so that I’ll know where to write to you next, since I believe England is about to lose you … I’ve had one letter from our two Laplanders [Maupertuis and Clairaut] just as they boarded ship. Farewell, monsieur, and write to me. Voltaire is still in that big nasty city [Paris] enjoying his triumph [at the theatre]—they’re mad about him. I should be very annoyed if these high honours in any way lowered your conduct—you are both made to love Cirey, and Cirey is where you are loved.

Image: the river running through the hamlet of Cirey-sur-Blaise.