From Émilie to the Comte d’Argental, February 1737

Poor Émilie! Stuck at Cirey while Voltaire is in Holland having some of his most controversial works published--because they were refused by the French royal censor. Today I should be bringing you a letter from Voltaire (I'm alternating their letters between 1735-38, to give you the pattern of their lives) but at the moment, because of coronavirus lockdown, I have no access to V's letters in French. If you know where I can access them online, kindly send me a bulletin on my Contact page! Meanwhile I'm translating extracts from Émilie's letters, in chronological order, more or less weekly.

I’m not going to suggest that Voltaire returns just to put himself into hiding as the ministry requires. For as long as they want him to return incognito, and insist that no one must know where he is, he’s in danger. Now, if he’s to run any kind of risk, how can I possibly be the one to ask him to come back? Besides, it’s impossible to keep him hidden where absolutely no one can find him. Concealment is a humiliating procedure that he will never consent to: it makes him look guilty, plus he’s well known in these parts, and wherever he happens to live, he always draws attention.

There are priests and monks all around us; he’s adored by honest folk in the province but there are also bigots here, as everywhere. In short, if he’s to be genuinely safe, it can’t be known that he’s at Cirey—it’s useless even considering it.

I did suggest to you at one stage that we might get him back and make sure his return is not publicly known, but I’ve no confidence that it could be kept from the minister; and if he were discovered and ran risks in consequence, how we would reproach ourselves! Moreover, what a triumph it would be for our enemies, to know that he was trying to hide himself away! I repeat, it’s too humiliating and he’d never consent to it. What I wanted was for him to stay at Cirey without anyone being aware—that is, without his sending any letters, and without his return being bruited about Paris; but that was when I thought he might do so without any danger of being caught—I could never ask anyone to run that kind of risk.

I feel as though I’m going to lose him precisely because I want to save him, and thus die from grief. But I’m also appalled by the thought of his coming back solely for my sake—and I could never give him any advice that would make him sorry for having followed it! I prefer to see him free and happy in Holland than living the life of a criminal in his own country. I’d rather die of grief than tempt him into a false step.

From Émilie to the Comte d’Argental, Paris 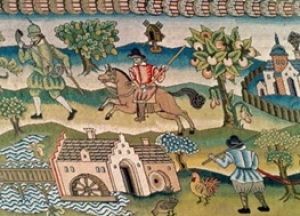 Voltaire dedicated his Metaphysics to Émilie and sent a copy to her with this verse:

Of the author of Metaphysics, beware:
He’s on his knees before you.
He ought to be burnt in the town square
But he only burns for you.

While Voltaire is in Holland in early 1737, Émilie is beside herself about this very work. She writes to their friend d’Argental:

In his letter of the 8th he sends me a copy of his letter to the Crown Prince of Prussia, that is all very well and all very prudent, but look what I find: ‘I shall be bold enough to send Your Royal Highness a manuscript that I would only show to someone with a mind as free of prejudices as your own, and who, amongst all the praises one may bestow, are worthy of boundless trust.’

I know this manuscript: it’s his Metaphysics, so replete with reason that it would send him to the stake, a book that’s a thousand times more dangerous—and certainly more actionable—than La Pucelle [Voltaire’s risqué poem on Joan of Arc]. Imagine how it shook me; I still haven’t got over my astonishment—or, may I tell you, my anger. I sent him a furious letter; but it will take so long on the way that the manuscript may have gone off before it gets to him, or at least he’ll be able to claim it has—because sometimes we are carried away, and the demon called reputation (his view of which I do not share) never leaves us alone.

I must tell you I couldn’t help lamenting over my fate, when I saw how little the tranquillity of my life must mean to him. In future I shall be always fighting against him for his own good, but without being able to save him. In his absence, I’ll be either trembling for him or lamenting over his faults. But in the end, that is my destiny, and it’s dearer to me than the happiest of futures. You must help me to parry this latest blow, if it can be done, because sooner or later his imprudence will destroy him for ever. The Crown Prince can no more keep this particular secret than he can himself.

From Voltaire to Frederick, Crown Prince of Prussia

At the beginning of March, I posted a letter from Madame du Châtelet as part of the correspondence written by herself and Voltaire from 1735 to 1738, all of which I selected and translated. I am now in lockdown during the coronavirus pandemic and I have Émilie’s correspondence on my desk--but Voltaire's has been returned to storage at the Fisher Library at Sydney University. Online searches cannot restore it to me (he wrote 15,000 letters after all!). Here is my solution. I have access to a selection of his letters: Voltaire in His Letters by S.G. Tallentyre (G.P. Putnam Sons, 1919) and it is out of copyright. For now, why not bring you Tallentyre's translations from Voltaire's side and mine from Émilie’s?

The letter I posted in March was from Émilie to the Comte d'Argental in 1737, desperately lamenting Voltaire's departure to Holland. She was terrified that he would succumb to the blandishments of the 'philosopher prince', Frederick of Prussia (later Frederick the Great) and go to Potsdam. So it's Voltaire's turn: here is some of a letter to Frederick written at that time, with translation by Tallentyre.

I examine man. We must see if, of whatsoever materials he is composed, there is vice and virtue in them. That is the important point with regard to him—I do not say merely with regard to a certain society living under certain laws: but for the whole human race; for you, sir, who will one day sit on a throne, for the wood-cutter in your forest, for the Chinese doctor, and for the savage  of America. Locke, the wisest metaphysician I know, while he very rightly attacks the theory of innate ideas, seems to think that there is no universal moral principle. I venture to doubt, or rather, to elucidate the great man's theory on this point. I agree with him that there is really no such thing as innate thought: whence it obviously follows that there is no principle of morality innate in our souls: but because we are not born with beards, is it just to say that we are not born (we, the inhabitants of this continent) to have beards at a certain age ?

We are not born able to walk: but everyone born with two feet will walk one day. Thus, no one is born with the idea he must be just: but God has so made us that, at a certain age, we all agree to this truth.

It seems clear to me that God designed us to live in society—just as He has given the bees the instincts and the powers to make honey: and as our social system could not subsist without the sense of justice and injustice, He has given us the power to acquire that sense. It is true that varying customs make us attach the idea of justice to different things. What is a crime in Europe will be a virtue in Asia, just as German dishes do not please French palates: but God has so made Germans and French that they both like good living. All societies, then, will not have the same laws, but no society will be without laws.